HOP ON HOP OFF
Bus Tours 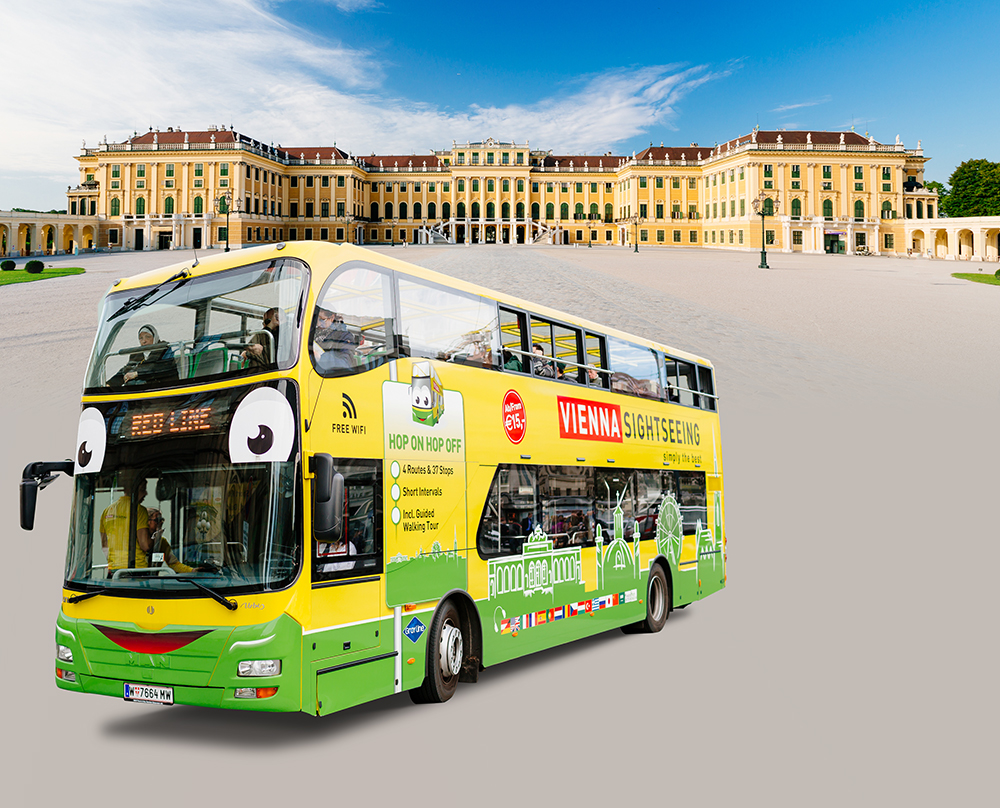 HOP ON HOP OFF
Bus Tours

HOP ON HOP OFF Bus Tours

Enjoy your sightseeing tour in Salzburg or Vienna

How can you explore Salzburg and Vienna in the most comfortable way? Hop on the yellow sightseeing busses, sit back and relax. Listen to the audio commentary available in many different languages and see all top sights.

HOP ON HOP OFF Salzburg: sightseeing by bus

Explore the city of Mozart and its beautiful surrounding with the HOP ON HOP OFF tours of SALZBURG SIGHTSEEING. You can choose from two different routes – the CITY TOUR and the LAKES & MOUNTAINS TOUR.

On the CITY TOUR you will see Salzburg’s top sights such as Mirabell Gardens, Getreidegasse with Mozart’s birth place and the trick fountains at Hellbrunn Palace. The LAKES & MOUNTAINS TOURS (June to September) shows you the outstanding beauty of the Salzkammergut region. This beautiful region is famous for its stunnig mountains and cristall blue lakes. Among the highlights on the route are: Lake Fuschl, Lake Wolfgang and Mondsee.

On the audio guide of the CITY TOUR you can even listen to a special ‘Sound of Music‘ channel explaining the true story of the Trapp Family with lots of behind-the-scence information and songs from the movie. Moreover, all tickets include a free ticket for all buses of Salzburg’s public transport system.

BOOK TICKET for Salzburg: from 25 Euro only 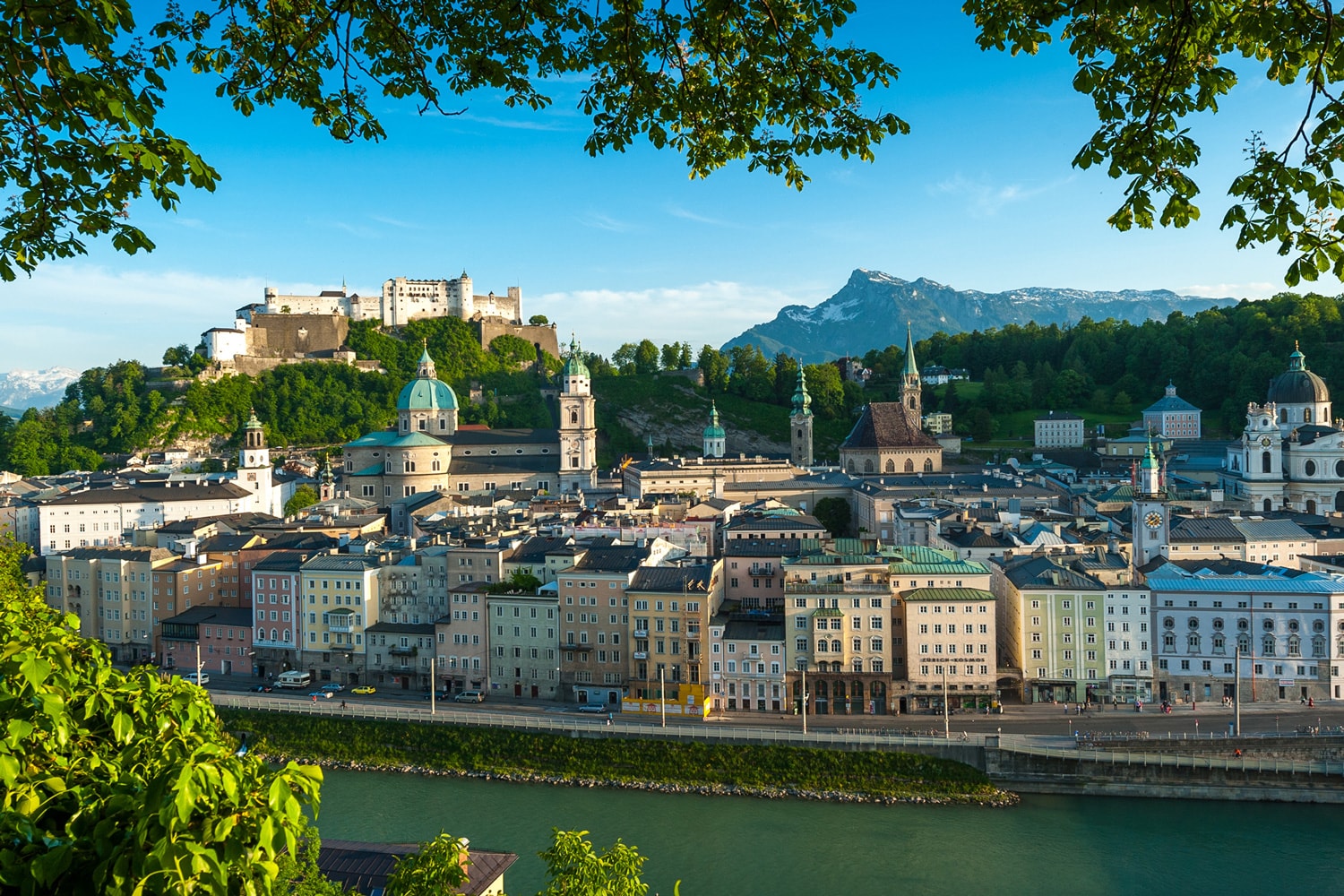 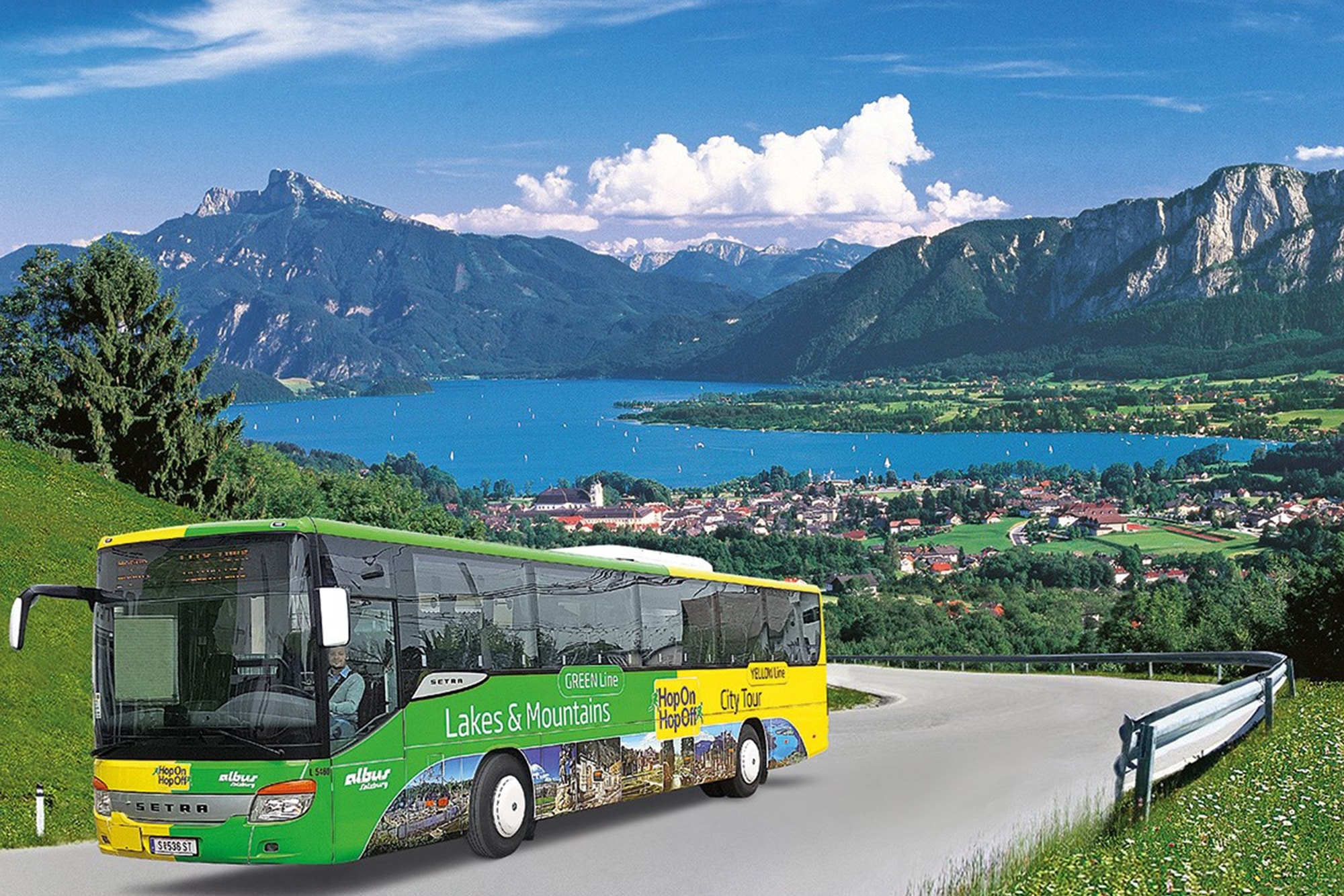 HOP ON HOP OFF Vienna: top sights on up to 6 routes

The HOP ON HOP OFF tours of VIENNA SIGHTSEEING are an easy way to explore Vienna. Hop on and hop off at as many stops as you like with just one ticket. You can choose from up to 6 routes and 50 stops.

The RED LINE takes you to the most important buildings along the Ringstrasse boulevard, from the State Opera past the Imperial Palace, the Museum of Art History, Parliament and Vienna City Hall to Burgtheater. From there, the route continues to Schwedenbrücke and back to the Opera via Stadtpark and Kursalon. With the YELLOW LINE you can visit Schönbrunn Palace. Other stops along the route are the famous Naschmarkt, known for its culinary delights and international atmosphere, Vienna Main Station, the Museum of Military History and Belvedere Palace. The BLUE LINE takes you from the Museum of Applied Arts directly to Kunsthaus Wien and the Hundertwasser Museum. The route continues to the Prater amusement park with the Giant Ferris Wheel and to the 150-metre Danube Tower.

The HOP ON HOP OFF tickets also include a guided city walk through the historical city centre of Vienna. Optionally, you can add a boat tour or an airport transfer.

BOOK TICKET for Vienna & save with our online special 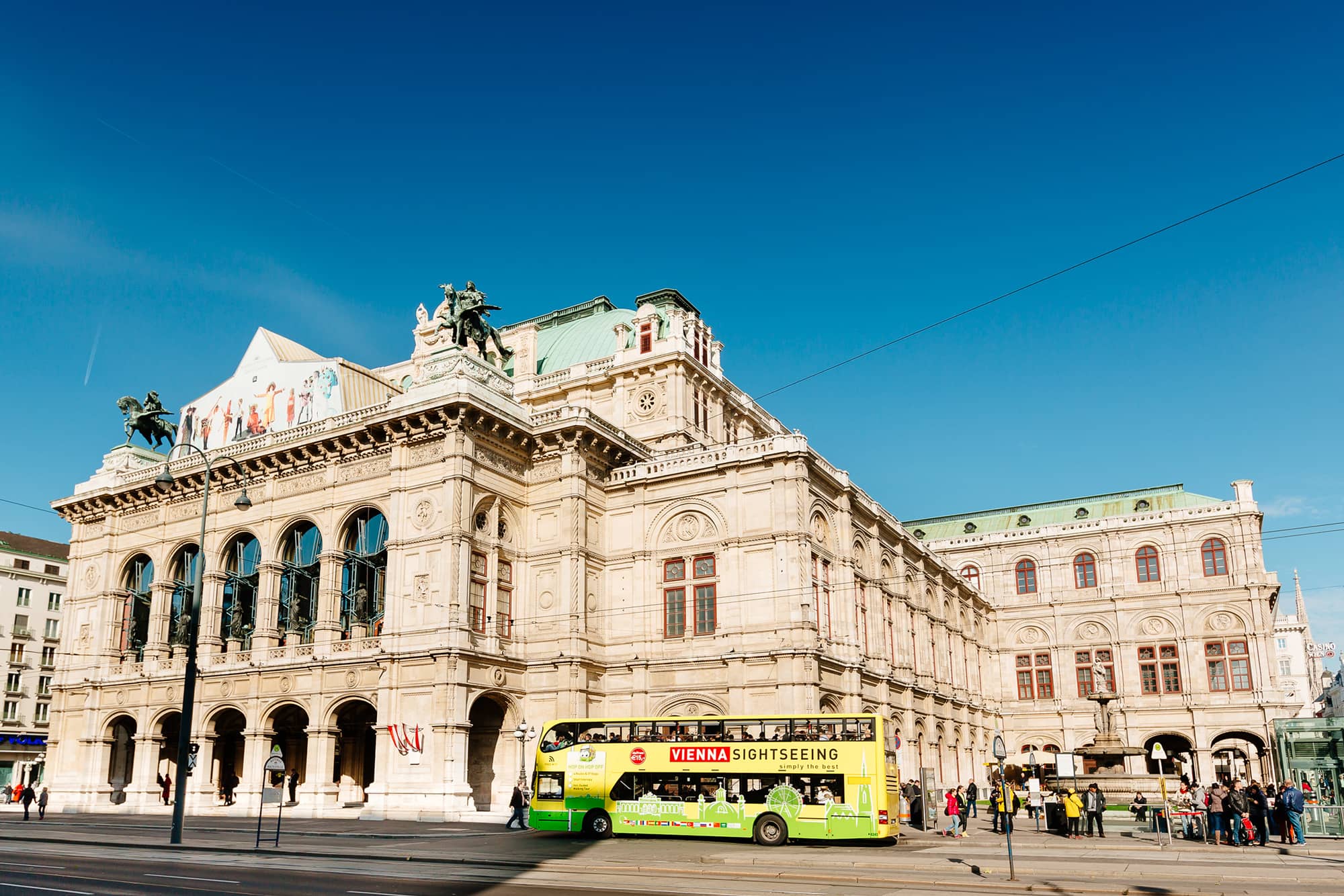 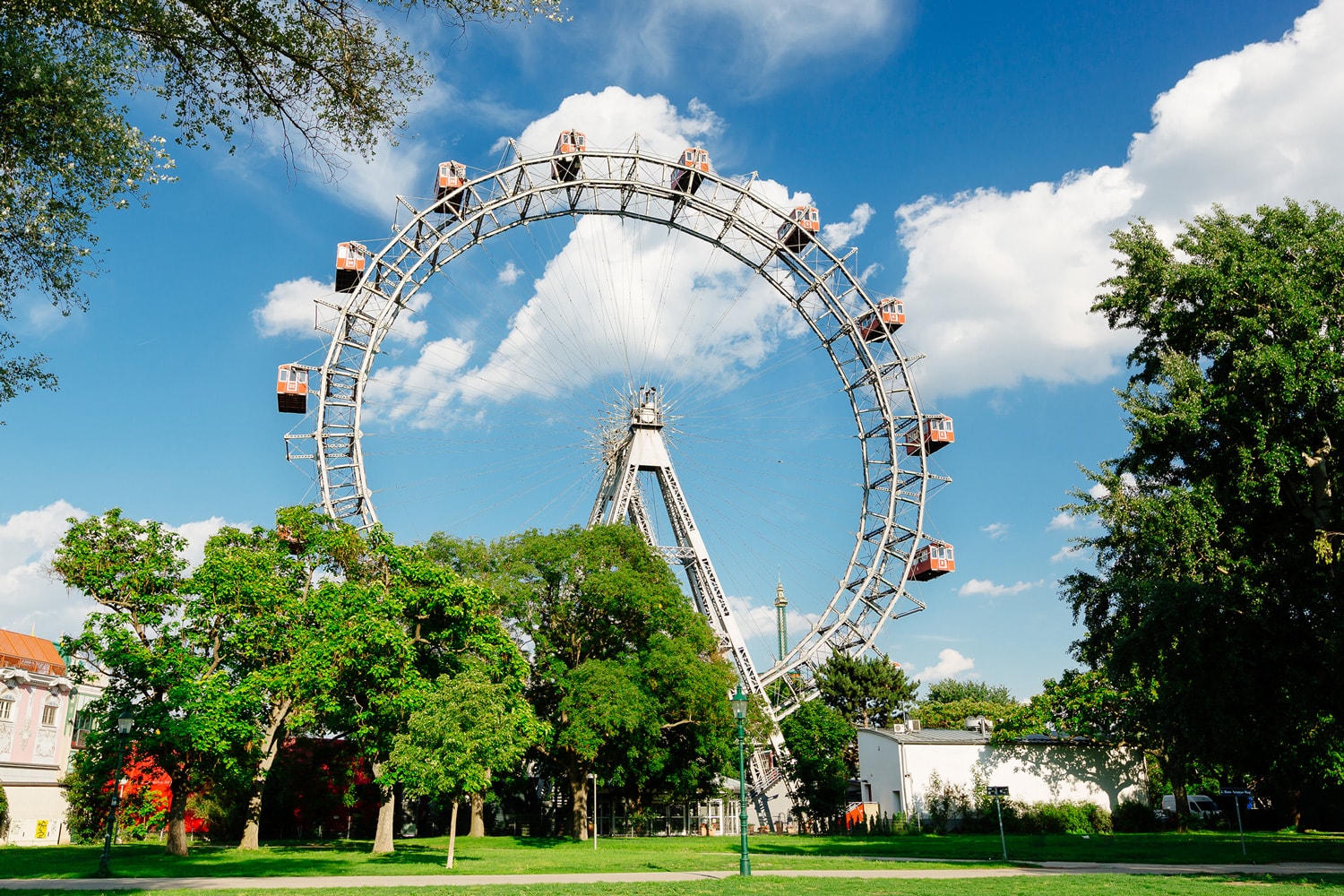 What is HOP ON HOP OFF?

If you want to discover a city in a comfortable way, you will love a HOP ON HOP OFF tour. The sightseeeing buses take you to the most important sights of the city where you can get on and off the bus as many times you want. The tours are for those who want to reach all planned attractions and, at the same time, get informed about the sights during a ride via audio guide.

What are the advantages of HOP ON HOP OFF bus tours?

Which HOP ON HOP OFF routes are available?

HOP ON HOP OFF Salzburg:  See all the important sights in and around Salzburg city on a CITY and a LAKES & MOUNTAINS TOUR.

Why booking HOP ON HOP OFF tours online?

By booking a HOP ON HOP OFF ticket online you can save time. Find all the information you need on the website and book your ticket easily.

What are the highlights of HOP ON HOP OFF tours in Vienna and Salzburg?

Take a HOP ON HOP OFF ride through Salzburg or Vienna and get an overview of the cities. See the top attractions of the cities and find out more about the background stories via audio guide.

The highlights of the HOP ON HOP OFF tour in Vienna are:

We are looking forward to welcoming you on board!
Your SALZBURG & VIENNA SIGHTSEEING team